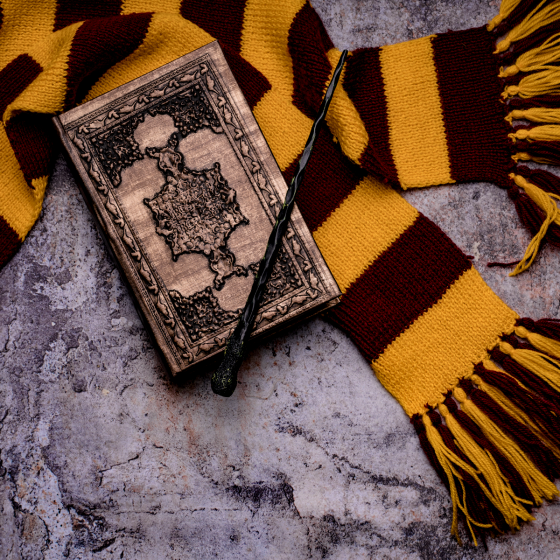 People have been infatuated with the wizarding world depicted in J.K. Rowling’s “Harry Potter” series, from famous sites such as Hogwarts and Diagon Alley to household charms, magical creatures, and the international sport played on flying broomsticks — Quidditch!

Read the introduction below with your child. Then, choose the word problem that’s the right skill level for them and have them give it a try. When they feel they’ve found the answer, check their solution against ours on the next page.

In J.K. Rowling’s “Harry Potter” readers follow Harry, a young orphan who discovers he is a wizard, as he navigates a hidden magical world. Readers learn about the cultures and governments of witches and wizards and are shown their everyday lives such as how they get around, their favorite sports teams, and the types of money they use. What kind of math-related questions might they encounter on a typical day? Let’s find out in this week’s word problem!

Upper Elementary: Question: A train leaves London for a small town in Scotland at 11:00 a.m. The train takes a 540-mile route and reaches its destination at 5:00 p.m. What was the train’s average speed during its journey to Scotland?

Algebra and Up: Question: Four teams have just finished a yearlong competition. The Serpents scored 32 points more than 1.25 times the number of points scored by the Badgers. The Badgers scored 3 less than 5⁄6 the number of points scored by the Eagles. The Serpents, Eagles, and Badgers scored a total of 1,250 points between the three of them. The Lions won the competition by 10 points. How many points did the Lions score?

Excellent job on today’s word problem! Are you ready to check your answer? Look below to see if your solution matches ours.

Lower Elementary: Answer: the chocolate frog, the book, the wand Solution: We can tell that each silver coin is worth less than a gold coin because it takes more of them to have the same value as a gold coin. The copper coins are worth even less because it takes even more of them. Since each object costs the same number of coins but the coins are worth different amounts, the object that is valued in gold coins is worth the most, the object valued in silver coins is in the middle, and the object valued in copper coins is worth the least.