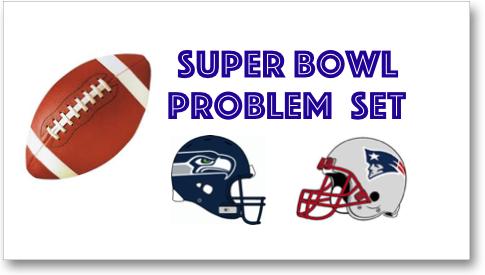 NFL Super Bowl XLIX is coming up this Sunday, so it’s time to warm up with some football themed math problems!

Question: Seattle Seahawks quarterback Russell Wilson is exercising to prepare for the big game this Sunday. He starts by doing 5 sets of 15 push-ups. After doing other exercises, he cools down by doing an additional 10 push-ups. How many total push-ups did Russell do?

Question: Alexis, a Seattle Seahawks fan, runs at an average speed of 5 feet per second. How many minutes will it take for her to run the length of a football field (100 yards) twice before the big game?

Solution: To find how long it will take, we need the units to have the same name: her speed is in feet per second and the distance is in yards. One way is to convert the yards to feet by multiplying by 3 because there are 3 feet in 1 yard. 100 × 3 = 300. She runs the length of the football field twice, so we multiply this by 2. 300 x 2= 600. So now we calculate how long it would take her to run 600 feet. To see how long it takes, divide the distance traveled by the rate at which Alexis runs. 600 ÷ 5 = 120 seconds. It takes Alexis 120 seconds to run the length of the field twice. To convert seconds to minutes, divide by 60 because there are 60 seconds in 1 minute. 120 ÷ 60 = 2. It would take Alexis 2 minutes to run the length of the football field twice.

Question: New England Patriots punter Ryan Allen kicked the ball from the end zone. The ball followed a path that is modeled by the function f(t) = -3t^2 + 24t, where t is time in seconds and f(t) is the how high the ball is off the ground in yards. How long will it take the ball to hit the ground?

One way to solve this problem is to factor the equation. Each term has a 3t in common, so we can factor that out.

By the zero product property, if two terms multiply to equal zero, then one of the terms must also equal zero. So, set each term equal to 0.

Now for the other term.

Subtract 8 from both sides.

Multiply both sides by -1.

So the ball is on the ground when t = 0 and t = 8. Ryan kicks the ball when t = 0 because that is when we start counting how long the ball is in the air. That means that the ball hits the ground at t = 8, or 8 seconds from when Ryan kicked the ball.